This letter was written by Ellen Lipscomb Wier (1838-1866), the daughter of Rev. William Withrow Wier, Sr. (1792-1853) and Elizabeth (“Betsy”) Lipscomb (1798-1864). Ellen’s mother was the sister of Abner Smith Lipscomb, first chief justice of the Alabama Supreme Court and also the first chief justice of the Texas Supreme Court. She died of a stroke during a Yankee raid on her plantation at Columbus during the Civil War.

I suppose by the time this reaches Jackson, you will be back there. Then I hope you will be sent on this railroad. Ann Hand and Ellen Hooker will start to Jackson tonight with Lieut. [Jasper C.] Winn. ¹ You must go to see them. I know cousin Tom will go every chance he can get. I think he fell in love with Ellen. They will stay with me tonight.

Ma has just received a letter from Ben—the first we have heard from him in a month or more. He had left Tullahoma, was at McMinville, Tennessee—Morgan’s Headquarters—with the Medical Department of Morgan’s Division. Had just been there two or three days when he wrote. Seemed very much pleased.

Sister Mollie received a letter too from Han. Nothing of importance from the 37th. ² Han has given up trying to get home and so sister Mollie thinks of going to Summerfield next week to stay a few weeks. Sister Abbie has not yet returned and we have not heard from her in a week.

The ladies are preparing to have a concert and some dramatic pieces. Lena, Ellen H. and I went to their rehearsal last night and I think judging from what we saw, they will not have any of the latter. Recon they will have some right good music. Suppose you come over and attend next week. Lena, Ellen and Jas. went fishing this morning. Wanted me to go with them but I declined. Cousin Tom will be jealous if he hears any more of Ellen in connection with Jas. You all will have to have Jas. funeral preached when he gets back if you have not already had it done as his old lady love—Molly Green—is married.

I received a letter from Fannie Norris yesterday. She says she is coming down here in about a month to stay with me awhile. She expected to come last week but was disappointed and had a big cry. She wants me to go up and stay with her until she comes down, and go to see cousin Jane; but I am not going.

Kate Fergerson left here this week. She spent the day with me Tuesday and left that night. She was out in the country nearly all the time she was here.

Ma received your letter and says she will write again sometime. She does not write often now-a-days. Dock, I want you to have your ambrotype taken and send it to me. If there is an artist at Jackson, have it taken right off before you forget it. Tell cousin Tom to send me his too.

Do you all get plenty to eat now? Sometimes we hear that some of the army about Vicksburg are about to starve. I do not much [think] that it is so—hope so at least.

Tell cousin Tom that Mr. Caldwell left last Saturday night. Said he could not face the storm any longer. Could not stand it until he would come back. Has gone to Selma.

Fannie Delamar was married last night to a Mr. Sentler from Texas. I will send you Ben’s letter. Keep care of it until you can send it back. Write soon & often. All join me in much love. Your affectionate sister, — Ellen

Night—Ann, Ellen, Lena and Fannie are all here. We are sitting up with Ann & Ellen. They leave at half after two o’clock. James is here too. He is going down with them. Ann says you must go out and see them. — E. L. W.

¹ Believed to be 1st Lt. Jasper C. Winn of Co. B, 14th Mississippi Infantry who was ordered from Corinth to Jackson, Mississippi, to serve as provost marshal there on 1 March 1863.

² Ellen’s brother, William Withrow Wier (1826-1900) served as a 3rd Lt. in the 14th Mississippi Infantry. Though that regiment surrendered at Fort Donelson, Wier escaped and returned to Enterprise and where he was elected Captain of the McLain Rifles of Clarke county. They were mustered into the 37th Mississippi Infantry as Co. B in March 1862. William eventually rose to the rank of Lt. Col. of the 37th Infantry. He was gravely wounded at the Battle of Peach Tree Creek on 22 July 1864 but survived. 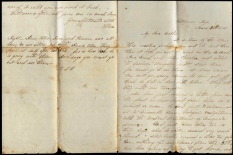