Anna wrote the letter to her father-in-law, Don Alonzo Spaulding who was a resident of Alton, Illinois, at the time.

The second letter was written by Anna’s father, James McMahan, and it was mailed in the same envelope as Anna’s letter.

Yours of the 17th November is received today. As you have not been notified of the previous draft, this letter must be the means of acknowledging both that, and the sum enclosed in your last. Please accept my especial thanks for the $5.00 which you so kindly sent to myself and children. I need not waste words assuring you that that it was both welcome and timely. I may say, however, that it will be soon invested in needed comforts which will keep the giver and the gift in remembrance.

I hope, indeedI immediately, on receipt of your former letter, enclosed it and forwarded to Henry and I have no doubt but that he would have acknowledged it to you long since if he had had postage stamps. I was not able to supply him with more than enough to write to me. He has not yet been paid off by government although one payment was due some time ago. He has just been promoted Orderly [Sergeant] and has been obliged to let me hear from him, through Callie [Calvin J. McMahan ¹] for want of time to write until a few days ago. He says he shall not be so when he becomes more perfectly acquainted with his duties which are numerous.

I hope, indeed, you approve of his joining the army. He left me with my full consent and earnest belief that it was just and right. I have been a drawback to him in many ways, but it cannot be said that I have held him back from duty. Since Henry’s enlistment he has decided to give up the place we engaged to buy. He feared to lay out the money you are now sending because in the event of his death, it would be lost. If he were certain of returning, it would have been safe, but not otherwise. I think you would say so. I am to take the money in government notes and save it until his return. There is no danger that I shall spend an unnecessary cent for my heart aches with longing for a home.

In Henry’s last letter which I received last Friday, he said they were under marching orders and expected soon to meet the enemy. As soon as I can learn his whereabouts I will forward your last letter and let him know I have acknowledged the receipt of the money.

Thank you for the home news. Some sad events are transpiring—especially saddening is the death of poor Mrs. Walker, leaving such helpless children. I wish I might do for her babe as she did for mine.

I hope Helen is well. I almost despair of hearing from her again. If Mr. Hanley were in the army, she would know how I feel and how doubly dear are letters from friends. My best love to her and to all.

Glad you liked the “Rural.”  It is only issued monthly and much the same reading matter in all the numbers but each one notes the increase of improvements. We will send you the next when it appears.

I think I have not omitted anything which I ought to say unless I add what you already know, and that is that we are always happy to hear from you and shall be glad for your sake when you are done with Henry’s perplexing business affairs which you are so satisfactorily attending to at so great inconvenience to yourself.

¹ Calvin J. McMahan enlisted as a private on Co. B, 24th New Jersey Vols. on 30 August 1862. He mustered out with the regiment on 29 June 1863 after 9 months service. He later served as a sergeant of Co. B, 2nd Regiment New Jersey Veteran Infantry. Calvin was Spaulding’s brother-in-law. 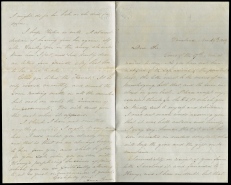 I acknowledge the receipt of your letter today containing a draft for one hundred dollars. I am sorry to hear of so much sickness and so many deaths in Alton and vicinity. Death has made sad inroads upon our old neighbors and acquaintances.

We are enjoying reasonable health and it is quite healthy in this section of country.

I long to see the end of the war and a return of peace. At present it looks much more hopeful than it did some time since. we are looking on with intense anxiety now upon the movements of our army towards Richmond.

I hope ‘ere long the Mississippi will be open and the North West will enjoy its free navigation. It appears that the gigantic preparations for the work are nearly complete.

Wife joins me in love to yourself and family. Our sons in the army & your son were well when we last heard a few days since. 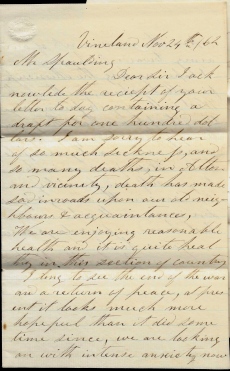