This letter was written by Theodore Holmes (1840-18xx) of Sandy Creek, Oswego county, New York. Theodore enlisted in Co. G, 24th New York Infantry on 17 May 1861 and mustered out of the regiment on 29 May 1863 at Elmira. He was a native of Canada. In the 1860 US Census, Theodore was identified as a wagon maker, residing in the household of 39 year-old James Thompson—a blacksmith in Sandy Creek.Theodore wrote the letter to his friend, Mary Ann Parmenter (1844-18xx), the daughter of wagon maker John Parmenter (1811-1893) and Alvira Fleming (1819-1900) of Sandy Creek. 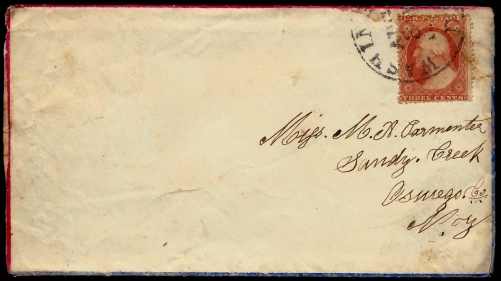 I have once more sat down to write you a few lines again. I have left the hospital and came to the camp. The boys are all well and doing well. I am a going to try soldiering and camp life a while longer. B[enjamin] C. Near ¹ went home yesterday. His discharge and mine was made out the same time but I thought I should like to see one battle before I went home and it is pretty good prospects I think for the Rebels are within three miles of us now and the cannons are roaring nearly every minute. They think they are fighting and we expect orders to march to the battlefield every minute.

The brigade to which our regiment belongs was drawn in line of battle and inspected by the President and Wm. Seward and three Major Generals and the 24th Regiment got the praise. I was not able to go with the boys so I did not have the honor of seeing those gentlemen. I have not told Mr. Lincoln what you wished I should.

I don’t know as I had better write anymore for I don’t think you appreciate my writing for I have written you two letters before this when I was scarcely able to hold my pen and you have not written me one letter since I was sick. Maybe it is because I did not send your letters but I intended to tell you that I destroyed them. By doing so, it saved the postage. I heard since I came here that Amelia was quite sick again. If you write, let me know if that is the case. Give her my best respects. I wish her health and prosperity.

[Lester] Bushnel ² thinks you sent him quite a compliment. I don’t know but your dream may come to pay yet for I talk of sending home for my watch for the Capt. wants to buy it. Now Mary, I wish you would write as soon as you get this. I will send some postage stamps so you will have no excuse unless you don’t want to. Good bye.

² Lester Bushnell, from Sandy Creek, enlisted in May 1861 as a private in Co. G, 24th New York Volunteers. He was discharged for disability on 8 March 1862 at Upton’s Hill, Virginia. He was also carried on the rolls as William L. Bushnell. 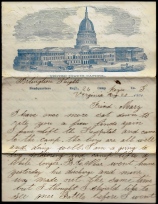 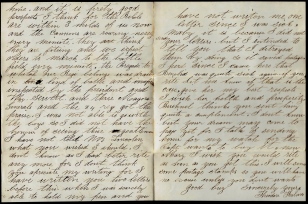 One thought on “1861: Theodore Holmes to Mary Ann Parmenter”