This letter was written by 19 year-old Theodore N. Hyde (1843-1863) of Co. C, 9th Iowa Infantry to his parents. The letter has no date, but was probably written in mid June 1862 as the regiment prepared to leave Batesville and make the 20 mile march to Jacksonport, on its way towards Helena where it arrived in mid-July. During this march across north Arkansas, “the weather was very warm and dry, and the troops suffered greatly from the heat, dust and thirst, and, on the latter part of the march, from insufficient rations. For five weeks of this time the army was cut off from all communication but fortunately no considerable body of the enemy was encountered and it at last arrived safely at Helena.”

Theodore Hyde was the eldest child of Ambrose Hulbert Hyde (1814-1899) and Eunice Ann Lewis (1819-1900) from Quasqueton, Buchanan county, Iowa. The couple were married in 1841 and made their way west to Iowa by 1853. Theodore enlisted with the 9th Iowa Infantry on 25 September 1861 and served with his regiment until he was killed in the fighting on Missionary Ridge on 25 November 1863.

Once more I pen a few lines saying I am quite well. I have not been sick except a cold. It has settled in my head and turned into a catarrh similar to Uncle Frank’s. I am in hopes that I can get where I can have right course of treatment. The Regimental Surgeon is worth nothing at all. He is universally disliked by officers & men. His miserable treatment of our wounded showed what he is—he is a regular scoundrel and they have been trying to get [him] out, but we can’t. ¹

The weather is awful hot and dry. We leave for Jacksonport tomorrow I expect.

Some of our transports in company with two of our gunboats, were coming up White River to Jacksonport. The gunboats were ahead. Just as they had passed a rebel battery, [it] opened fire on the transports. A ball went through the boiler of the City [of] Alton and scalded 136 of our men. ² The men jumped overboard and tried to save themselves. One of our gunboats dropped down the stream, landed troops, surrounded them, took the battery—three 44-pounders, [and] killed every man but two or three.

Jacksonport is situated at the junction of Black & White Rivers—not a very nice place, but it does a great deal of business situated at the head of navigation. Sugar good article for 7 & 10 cents. ³ When we get down there—if I can get a chance—I shall send home a[n] overcoat of mine. It is good and I do not like to lug it around and get it spoilt for it is a good U. S. government coat. If I can get the chance, I shall send home some groceries to you. We have lots of apples, plums and will soon have peaches. We have had a good many new potatoes.

Last Friday we started out on a forage expedition in company with Co. G of the Ninth Iowa, Co. K & C of the 4th Iowa Cavalry, and 39 wagons. We were gone three days. We went over the roughest country I ever saw. We filled all of our wagons. We went out about 30 or 40 miles is all we took by paths and roads to find our corn. Some had it hid and then said they had none. Such men we took it from without paying for it and they cannot get any pay till they give bonds for good behavior and take the oath.

We have got a new Captain—Dr. R.W. Wright of Independence. Capt. [Hiram C.] Bull had been promoted to Major in the regular Army, ranking as Major.

Father and Mother, pray for me that I prove faithful. Kiss the children for me and tell them to be good. Excuse all mistakes for it is so warm I can hardly write. Wheat is all harvested and a good deal of it threshed. U. S. pays one dollar per bushel for wheat.

¹ Benjamin McClure (1824-1894) was the Regimental Surgeon of the 9th Iowa Infantry at the time. According to the Directory of Deceased American Physicians, McClure received his degree from the Harvard Medical School in 1852 and set up his Allopathic practice in Dubuque, Iowa, in 1856.

² Surprisingly I cannot find an account of this incident leading me to wonder if it was actually the steamer City of Alton or some other transport.

³ Jacksonport, Arkansas, had previously served as a supply center for General Van Dorn’s troops prior to the Battle of Shiloh when it was abandoned. When the Confederate army evacuated the town, they attempted to destroy the stockpile of supplies they had stored in Jacksonport which included a very large supply of sugar. It is reported that they rolled the barrels into the streets and emptied them until sugar was “two or three inches deep in the principal street for a distance of one or two blocks.”  Apparently they did not destroy it all, however, as there seemed to be no shortage by the time the Union troops arrived in the city. 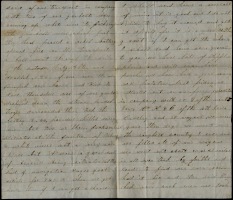