Joel wrote the letter to his older sister, Mary Ann Parmenter (b. 1844). After the war, Joel married Alice Celestia Newton and moved to Michigan in the 1870s.

I received your letter of the 16th. Was glad to hear from you. I am well and enjoying myself first rate. I have gained 17 pounds since I left home. I weigh 144½ pounds. I am on camp guard today. I have to stay to the guard house when not on post. It is not quite so pleasant as picket duty but we must take the bitter with the sweet. You know we are just doing the business right up now days. In the forenoon, [we have] squad drill 8 o’clock, company drill 1 p. m., 4 p.m. battalion drill, 5 dress parade. We have six companies here now so that I do not have to come on duty but one day in three. I must stop for the present for it is most time for me to go on duty.

I have just returned from duty and swallowed my dinner. I had bean soup and hard tack. It made a pretty good dinner.

I expect to go out on extra picket one of these nights. It is to a place called the Westover House. ¹ There is six goes out there every night—one from each company [as] volunteers. The object of this is to watch for deserters and an old nigger that rows them across. There is a bounty offered on his head of the same amount that we have already got and 60 days furlough to the man that will fetch him in dead or alive. But the trouble is they don’t know where he crosses the river. But if I can get out, I shall try him on.

Tell Father that I have drawn everything even to rubber blanket and dress coat. The former is a very necessary thing but the latter is something that the boys don’t need or want but the officers would not take no for an answer. We must take them whether we wanted them or not, but I think they will find but a very few of them in the regiment if we are ever on a long march. I wrote to Father on the 16th and also sent $10 in Massachusetts money. It was only in one bill.

Kiss L. for me. I would like to see her just one minute. Moll, I wrote to L. Birch when I was in Elmira. I wish you would find out whether she has got it or not and whether she has answered it. You know how  to do it without letting her know that you know anything about it. Tell her that you have got a letter from me and in that way you can find out and tell me in your next.

I must close now so goodbye for this time. Give my love to all enquiring friends. From your affectionate brother, — Joel E. Parmenter

¹ The Westover House was the homestead of the Byrd family’s plantation that was located on the north bank of the James river in Charles City County, Virginia. In 1864, Westover was used as the division headquarters, Army of the James. A painting by Edward Lanson Henry of the structure in 1864 reveals an observation tower that had been constructed on the roof which offered a commanding view of the James river. 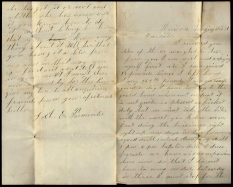 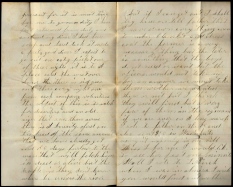 One thought on “1864: Joel Eugene Parmenter to Mary Ann Parmenter”