In this incredible account of the Battle of Chancellorsville, Pvt. Huffman informs his wife that the “Yankees fought desperately,” and he names many acquaintances from Wilkes county—including his brother in law Lorenzo D. Whittington of Co. B, 1st North Carolina—who were either killed or wounded in the fight. Huffman’s regiment, the 18th North Carolina, was one of five North Carolina regiments that served in James H. Lane’s “Carolina Brigade” in A. P. Hill’s Division and Stonewall Jackson 2nd Corps. They were in the second line of Jackson’s surprise flank attack on—and rout of—O. O. Howard’s 11th Corps on the evening of May 2, 1863. They also led the attack the next morning in the fight to gain Fairview Hill west of the Chancellorsville crossroads.

Years later, when referring to the severe fighting in the Wilderness on May 3, 1863, Gen. Lane wrote:

“The woods were on fire, shells, dropped loaded muskets & cartridges were exploding in every direction. The dead, Confederates as well as Federals, were on fire, & helpless wounded Federals-officers & men-begged to be removed from the approaching devouring flames but we could render no assistance.  On reaching Colquitt, we had to wait until the woods on his left was burnt over, before we could prolong his line. There we remained until the next day in the ashes & the charred scrubby oaks, & it was hard to tell whether we white or black, Federal or Confederate so far as the color of our clothes were concerned.  When we were ordered back, the troops in rear received us with boisterous laughter & cheer.  My brigade was in nearly every great battle fought by the Army of Northern Virginia, but in none did I ever witness so many harrowing scenes as I did at Chancellorsville.”

Civil War buffs will also recall that it was members of Gen. Lane’s North Carolina Brigade that mistakenly fired upon Gen. Stonewall Jackson and his staff in the twilight of the May 2nd, mortally wounding the legendary commander.

I take the present opportunity of writing you a few lines to let you know that we have had a terrible fight last Saturday & Sunday near the Rappahannock rover about 10 miles above Fredericksburg in which a heavy loss was suffered on both sides. It was doubtless one among the hardest struggles of the war since it first began. I am glad to state that I was not slain during the fight but slightly wounded. I had the middle finger of my left hand shot off, two balls passing through my knapsack & haversack, so I was struck 3 times but fortunately but one [finger] took off. I had my finger taken off by the doctor at the upper joint in the hand. I am getting along very well considering and hope I will get to come home soon. It may be that I will not get there before this comes but if I do, it will all be right.

Your brother L[orenzo D[ow] Whittington was wounded also. He had his left arm broken & is gone too Richmond. I think he will have to have it taken off so he will be at home before long. William Pilkinton was killed and Thomas Eller also. John Pennel is mortally wounded. Andy Profitt was killed. Ans Connoy was wounded in the hand. I believe that’s all that I know of from your settlement. ¹ There are a great many wounded about here now waiting for transportation to Richmond but they seem to get off very slow.

I am trying to get off myself but don’t know when I will. I must close by saying I hope to get home soon & tell you more than I have time to write. If I don’t get off in a few days, I will write again. From your husband, — J. S. Huffman

I forgot to say that Richard Whittington was reported killed. I don’t know whether it’s true or not. We repulsed the Yankees & drove them back across the river [and] took between five & ten thousand prisoners, but we had hard fighting to do it. The Yankees fought desperately. Hence our heavy loss.

The Colonel of my regiment [Thomas J. Purdie] was killed & the Lieut.-Col. [Forney George] ² wounded, & one of my company officers wounded. I have not had any letters from you since I wrote my last  …[remaining portion of letter too badly faded & smudged to read].

¹ These soldiers were all from Wilkes County and served in Co. B, 1st North Carolina Infantry (part of Trimble’s Brigade led by Raleigh E. Colston at Chancellorsville).

² Lt. Col. Forney George submitted the following report on his regiment’s participation in the Battle of Chancellorsville:

SIR: I beg leave to submit the following report of the part taken by the Eighteenth Regt. North Carolina troops in the late battle of Chancellorsville:

Early on the morning of the 2d instant, we were drawn up in line of battle about three-fourths of a mile to the right of the Plank road leading from Fredericksburg to Chancellorsville, and about 1 1/2 or 2 miles from the latter place. We were then ordered forward to support one of our batteries, which was engaging the enemy. Very soon the battery was disabled and withdrawn, and we lost 1 man killed and another mortally wounded by the shelling of the enemy.

Between 8 and 9 o’clock we took up our line of march across and to the left of the Plank road, and by the way of Welford’s Iron Forge, the enemy shelling us as we passed; thence, by a circuitous route of some 8 or 10 miles, we reached the Turnpike road leading from Orange Court House to Fredericksburg, and about dark of the 2d instant came upon the right flank and to the rear of the enemy, and for a short time were exposed to very severe shelling, by which we lost several killed and wounded. We were then drawn up in line of battle on the left of the turnpike, our right resting on the road, and ordered to charge the enemy’s battery, some distance in our front. We had not advanced far (being informed that there was no one but the enemy in front of us) before Gen. A. P. Hill and staff, who had been fired upon by the enemy, rushed upon our line in order to effect their escape, when our men, thinking it was a cavalry charge from the enemy, fired several rounds at them, doing some damage before the mistake was discovered. Very soon the enemy opened fire upon us, killing and wounding several of our men. We were then ordered across and to the right of the turnpike, and formed about 300 yards from and perpendicular to the road. During the night the enemy advanced upon us twice, and each time he was repulsed in handsome style. We captured 3 prisoners, one a lieutenant and aide to Gen. [A. S.] Williams.

Early on the morning of the 3d instant, we were ordered forward to charge the enemy’s breastworks and a battery mounting twenty-eight guns. The men moved forward in good order. The first line of works was carried without hinderance or damage; then we advanced to within a few yards of the second line of works, and about 200 yards of the battery mounting twenty-eight guns, when the enemy opened upon us a most terrific and galling fire of grape, shell, and Minie balls. We held our ground, suffering very severely, for about half an hour, when the enemy, being heavily re-enforced, turned the right of our line, leaving our right flank exposed. We were then ordered to fall back, and just then our gallant colonel (T. J. Purdie), encouraging his men both by word and example, was killed instantly by a Minie ball passing directly through his forehead. We were then taken back and formed on the left of the turnpike, and the regiment acted as skirmishers for most of the time until the battle was ended. Both officers and men behaved well throughout the entire engagement.

Our casualties during the whole time were 34 killed, 99 wounded, and 21 missing.

All of which is respectfully submitted. 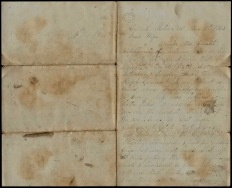 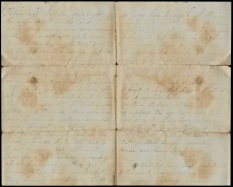